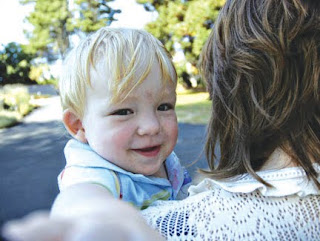 Charming Park Slope toddler JONAH WEISHAAR has been diagnosed with a genetic disorder, Sanfilippo Syndrome, which prevents his body from processing certain sugars, reports the Daily News. Sufferers are one in a million, and rarely do they live past their early 20s. The new web site dedicated to Jonah reads:

“This is Jonah. He’s turning two and loves Elmo, throwing his ball in the park, stacking blocks, and patting dogs. And he is slowly dying.
“At his one-year-checkup, Jonah’s doctor observed that his head circumference was ‘off the charts,’ and suggested an MRI. Jonah was diagnosed with Sanfilippo Syndrome, Type C.”
His parents, JILL WOOD and JEREMY WEISHAAR, are in the process of creating a not-for-profit foundation, Jonah’s Just Begun. (The paperwork has been filed and they hope to have our foundation certificate by January 2011.) She told the News, “I have a limited amount of time to save my baby’s life. The cure could be out there,” adding that its first goal is to find enough sufferers so that a proper medical study can be done.
“This disease has not been fully documented. It has to be studied,” she says. “I have to do this. In the long run, I feel morally responsible for the next generation.”
As stated on the site, Jill and Jeremy’s mission with the foundation is to raise awareness for the Sanfilippo disease. “Ultimately, we will find a cure for our son, others like him and the future generation. We strive to educate everyone who crosses our path on the symptoms of Sanfilippo, and encourage our friends and family to do the same. The foundation will focus on educating those individuals on the front lines to think outside of the box.”
To learn more, contribute or follow Jonah’s story, visit www.jonahsjustbegun.org.
* * *
“As I Am Fully Known” will be one of the many innovative pieces that will be running next month as part of the New York International Fringe Festival, at famous Off-Broadway playhouse La Mama.
In “As I Am Fully Known,” set in Bay Ridge, meet Gina (played by playwright EMILY RIEDER), a 25-year-old Catholic lesbian living in Brooklyn who is coming to terms with her sexuality. Now meet her religious family — who all struggle to accept Gina as she chooses which rules she will live by. Funny and poignant, the production examines whether one person’s decisions can, among other things, “bring down the wrath of God on an entire family.” As Gina’s relationships with her family members are put to the test she begins to move forward in her own life.
The production is comprised mostly of Brooklyn residents; playwright and star Rieder and actor JESSE PRESLER live in Sunset Park, actor/producer GRETCHEN FERRIS and producer GINNY LEE live in Kensington, actor REBECCA NERZ lives in Flatbush/Ditmas Park, and director ANDREW OSWALD lives in Williamsburg.
* * *
Farmer’s market quality produce has found a home in Bed-Stuy bodega corner stores, due to the dedication of CITY HARVEST and Red Jacket Orchards, who are holding a special cooking demonstration today, Monday, at 3 p.m. The demo is at L&H Market on 354 Lewis Ave.
As part of their participation in Department of Health’s Healthy Bodegas initiative, this bodega has been stocking produce from Red Jacket Orchards, a third generation family farm located in Geneva, New York. Volunteer nutritionists and chefs from City Harvest are showing local residents how to prepare healthy and delicious recipes using available produce, in order to boost demand.

Howe’s Brooklyn: Shakespeare’s Twelfth Night Without a Man in Sight